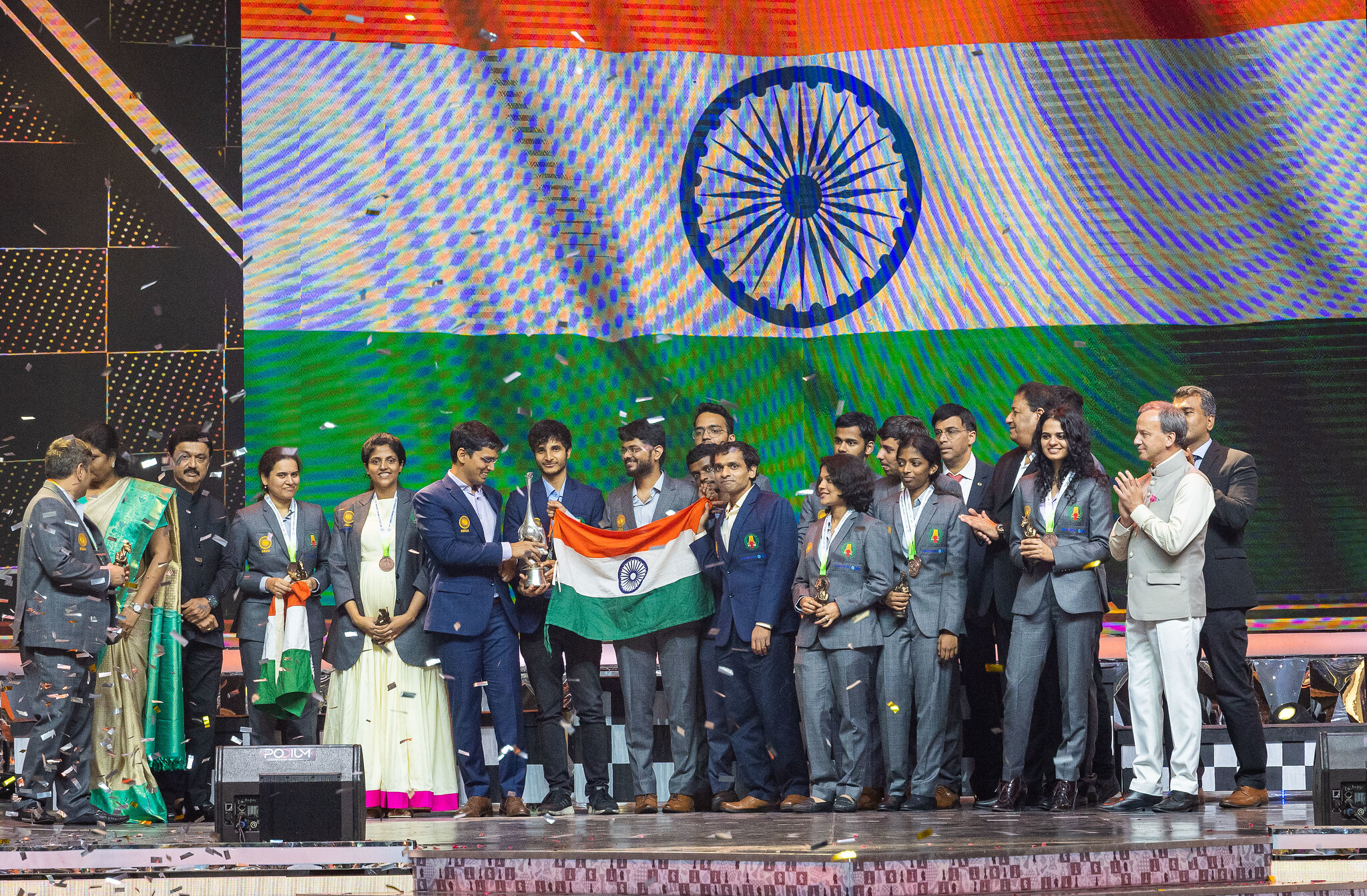 The closing ceremony for the 44th Chennai Chess Olympiad took place at the Jawaharlal Nehru Stadium yesterday evening, with the presence of Tamil Nadu Chief Minister M.K Stalin along with FIDE president Arkady Dvorkovich, Deputy President and GM Viswanathan Anand among other authorities. 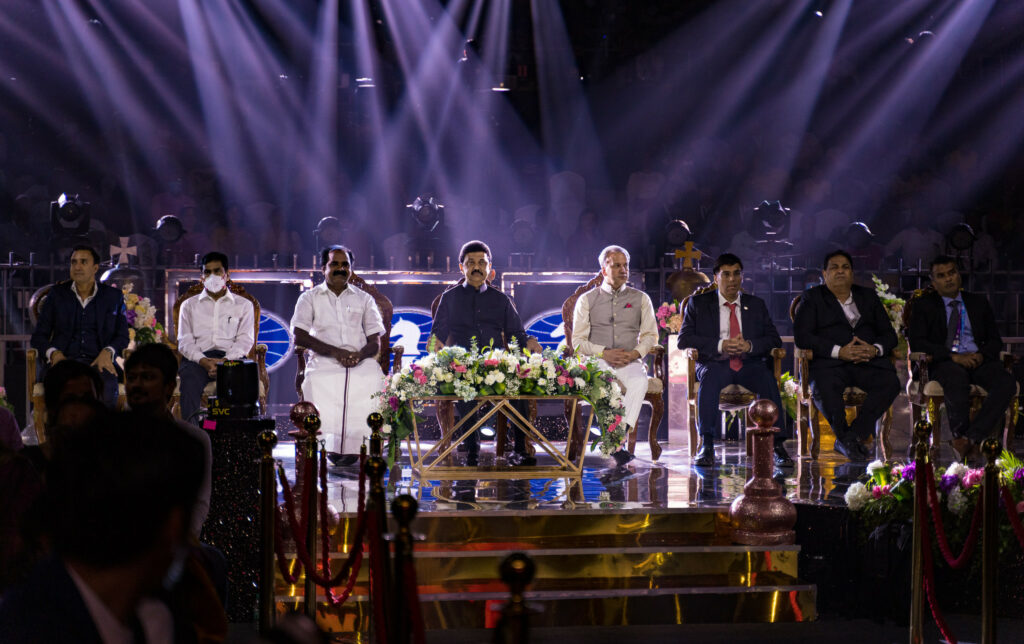 During the action-packed evening, the authorities awarded medals and other prizes to all of the winners. Chief Minister M.K. Stalin presented the medals to the winners in the open category – Gold for Ukraine – while FIDE President Arkady Dvorkovich handed over the open section winner’s trophy to GM Ivan Sokolov, outstanding coach and captain of the young Uzbekistan squad. 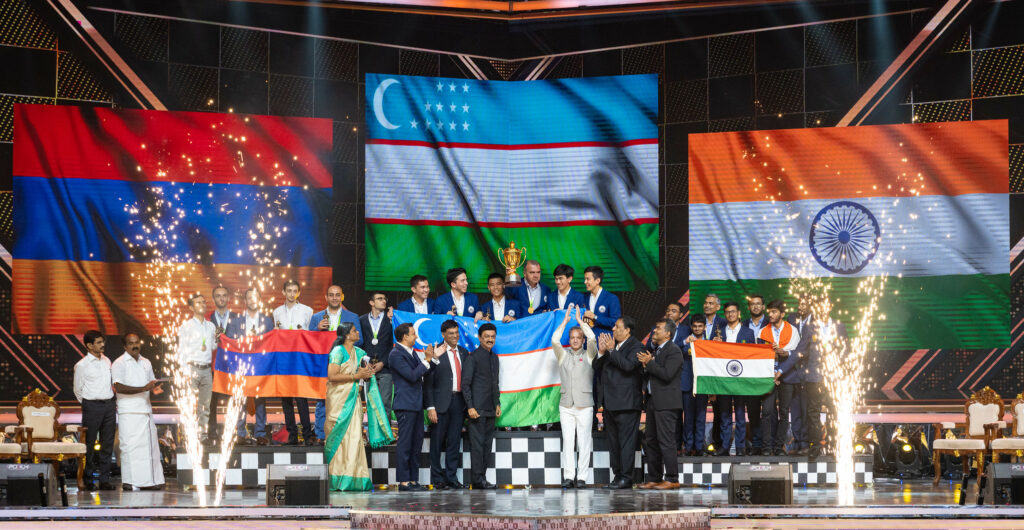 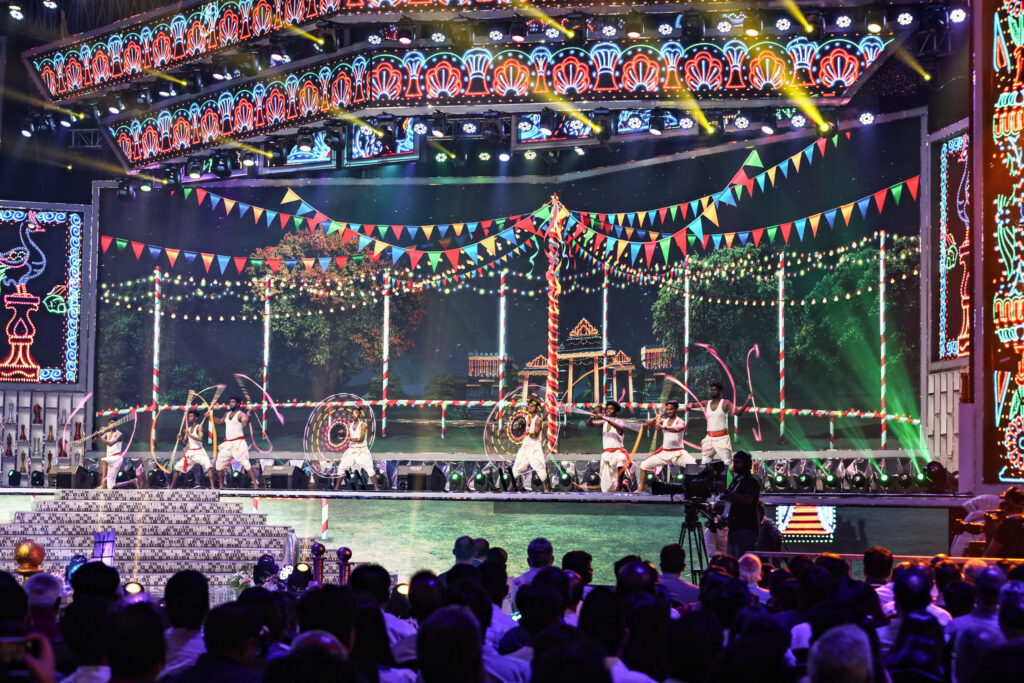 The audience was also delighted to see the V. Unbeatable dance group, famous for winning the 2020 ‘America’s Got Talent’ show. Many other great performances enlivened the evening.

At the end of the four-hour, full of entertainment, FIDE president Arkady Dvorkovich closed the 44th Olympiad and the Olympic flag was handed over to the Laszlo Szabo, president of the Hungarian Chess Federation – Budapest will be the 2024 venue. 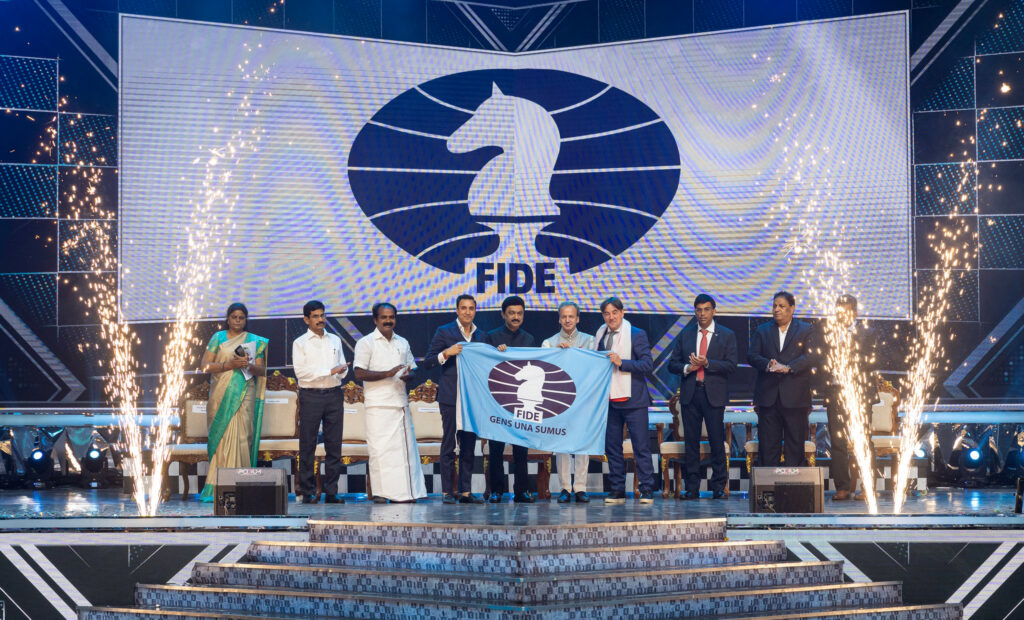 Although the chess Olympiad is essentially a team event, board-prizes were awarded for the best performances on each individual board. In order to qualify for the medal, players had to have completed at least eight of the eleven games. Nonetheless, many of the players went the full distance.

The immense majority of the players were able to attend the ceremony and receive their awards: however, the absence of the World Champion didn’t go unnoticed.  A huge round of applause was heard when siblings Praggnanandhaa, R and Vaishali, R shared the podium for bronze on board three. (Standings: Gold – Silver – Bronze) 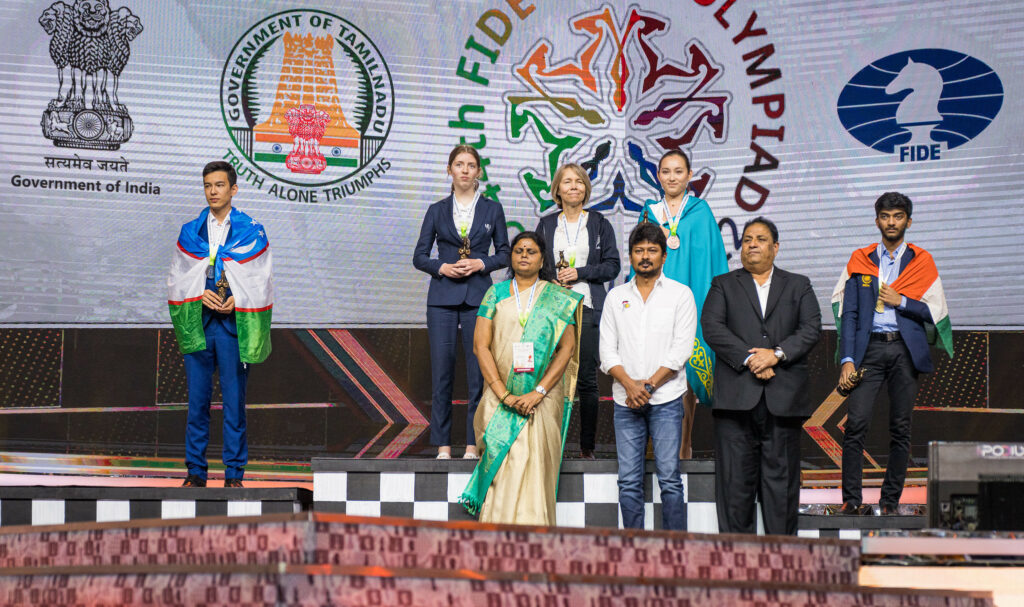 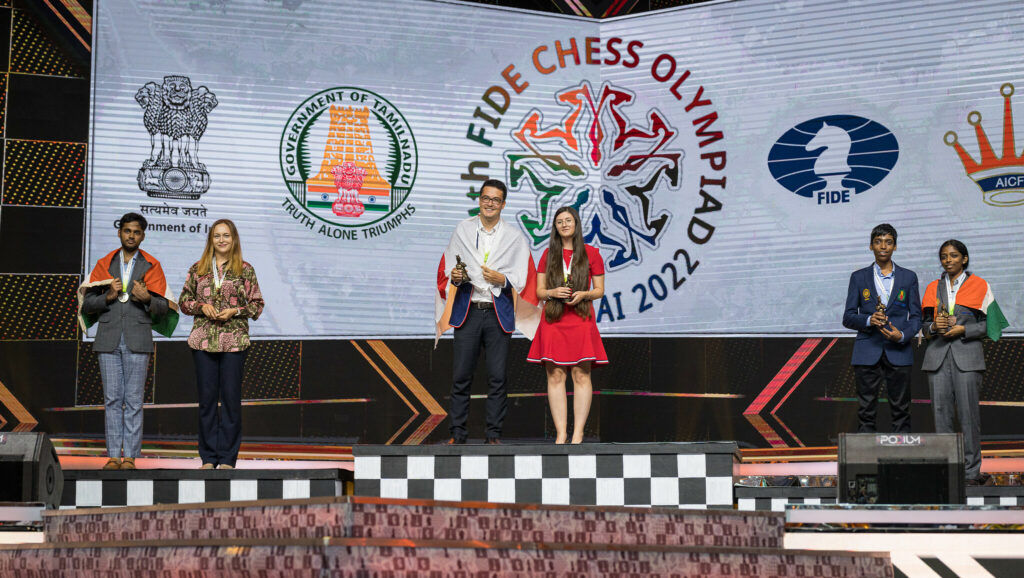 In the Olympiad teams are distributed in to five categories, according to strength, and category or section medals are awarded to for the best scores. For most countries, these medals are an opportunity to validate their chess improvement.

During her career, fifth women’s world chess champion Nona Gaprindashvili, who was also the first woman ever to be awarded the FIDE title Grandmaster in 1978, successfully competed in men’s tournaments, winning amongst others the Hastings Challengers tournament in 1963/4.

The Cup name after her awards the combined supremacy of a team in both sections. Three teams tied in this endeavour – India, USA and India B – but the Cup was awarded on superior tiebreak to India. 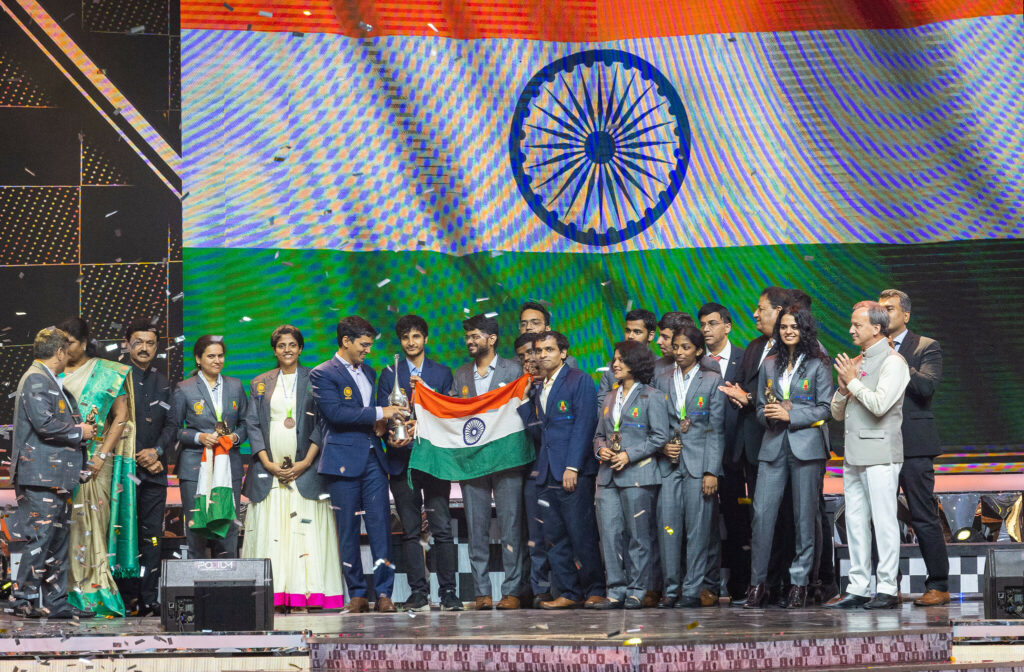 Many players fight for Olympiad title norms because a nine to eleven-round norm can be extremely useful to complete a Grand Master (GM) title.

The requirements were – unofficially – achieved by the following players:

Complete final standings, including team and individual performances, can be found at the official website for the Olympiad: https://chennai2022.fide.com/open-standings

Complete results for round 11 can be found at the official website for the Olympiad, https://chennai2022.fide.com/open-results.