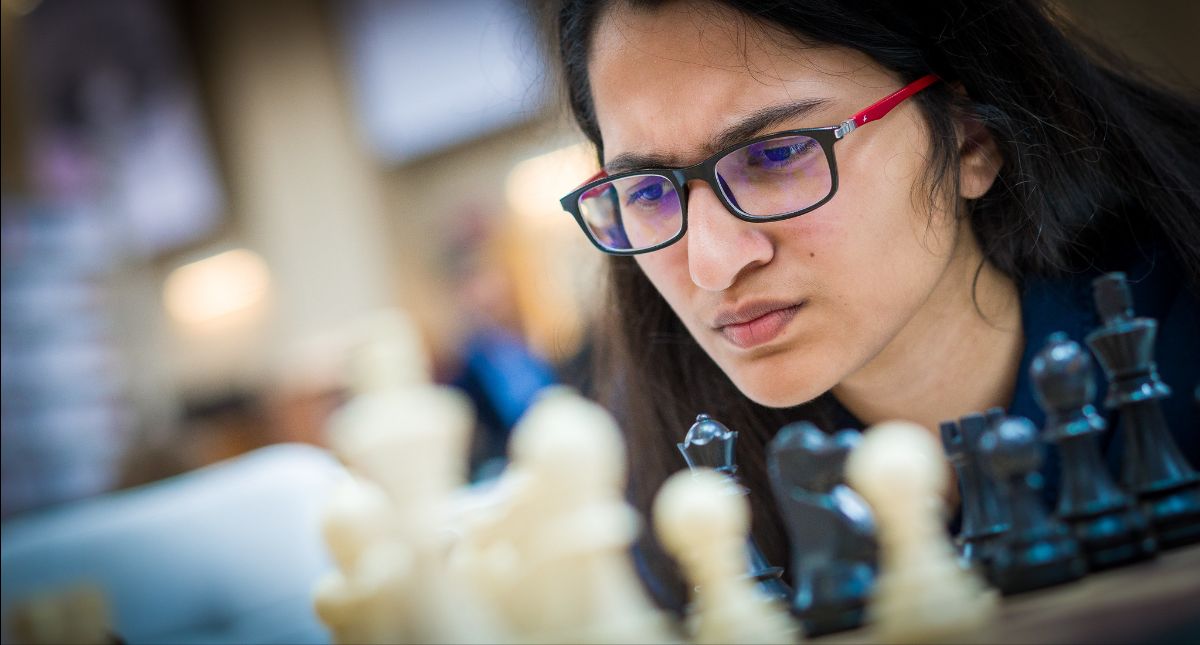 In a major setback for India, overnight sole leaders in the Women’s section India A were upset by fourth seed Poland 1.5-2.5. R Vaishali lost the only game to WIM Oliwia Kiolbasa who incidentally scored a scorching 9/9 while the three other boards ended in hard-fought draws. India B trounced Switzerland 4-0, with Vantika Agrawal making her IM norm. India C also defeated Estonia 3-1.

The tournament is tantalisingly poised, the race for all the three medals still wide open, with the Teams bunched closely together.  The last two rounds are crucial, and the top-seeded India A women’s Team need to get their act going.

In one of the crucial games, second seed Ukraine was held to a 2-2 draw by Georgia, and hence India A women continue to lead but are joined at the top by Georgia, Poland and Kazakhstan, all having scored 15 points each. Kazakhstan routed Bulgaria 3-1.

Koneru Humpy playing the black side of a QGD showed good preparation and equalised early in the opening against Alina Kashlinskaya. Pieces were exchanged at regular intervals and players decided to split points in a dry rook ending just before the first time control.

Harika Dronavalli and Monika Soko fought in a Queen’s Indian Defence, with the former enjoying an advantageous position throughout. Harika tried to combine her pieces together on the King-side to launch an attack, but Monika blunted out the attack. Harika could not find the winning continuation, and a hasty pawn move allowed the trade of queens and Harika’s attack fizzled out with the game ending in a draw after 41 moves.

R Vaishali’s good run ended against Oliwia even as the game appeared to be heading towards a draw for the most part in a Spanish set-up. In a slightly inferior ending, Vaishali lost way, and Oliwia exhibited good technique to pocket the point after 80 moves.

Complete results for round 9 can be found at the official website for the Olympiad, https://chennai2022.fide.com/women-results.

Standings after round 9 can be found at
https://chennai2022.fide.com/women-standings