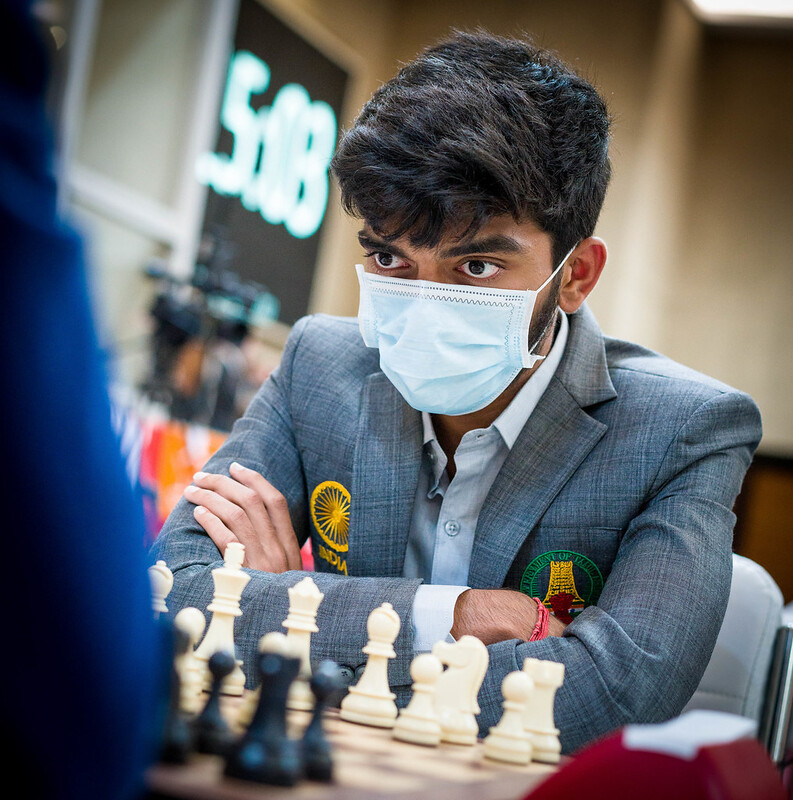 In the Open section, Armenia and Uzbekistan have emerged as joint leaders with 17 points each, while India A, India B, and USA are bunched together in second place with 16 points each.

With just two rounds remaining, the pressure was telling on all teams and players as fortune fluctuated on quite a few boards today. D Gukesh who had been going great guns with a fantastic 8.5/9 had a bad day as he bungled in a very advantageous position, and missed many equalising opportunities to end on the losing side against Nodirbek Abdusattorov in a high-intensity game. The India B Team thus had to settle for a 2-2 draw against Uzbekistan.

India A, seeded second, put up a heart-warming performance to score a 2.5-1.5 victory over Iran. Vidit Gujrathi and S L Narayanan scored the victories for India while Harikrishna ended up on the losing side. Arjun Erigaisi drew his encounter.

For India B, Praggnanandhaa impressed with his play and snatched the only victory for his team, while Adhiban and Nihal Sarin drew their games.

India C Team were held to a draw by lower rated Slovakia 2-2 with Abhimanyu Puranik scoring a victory, Sethuraman losing his game and Ganguly and Karthikeyan held to draws.

The race for all three medals is still wide open, with the last round tomorrow promising plenty of thrill and excitement. Tomorrow it will be more of a battle of skill and nerve when the last 11th round will be played tomorrow morning.

In the Open section Armenia, seeded 12th, scored a thumping 3-1 victory against sixth seed Azerbaijan. The USA had a comparative easier draw and thrashed Turkey 3-1, and Serbia drew against Netherlands 2-2.

Nihal Sarin played the Caro-Kann against Nodirbek Yakubboev and missed way allowing his opponent to dominate but later defended dourly in an inferior position quipping “ I suffered throughout the game in a minus position, just happy with the draw. There is intense pressure on all of us but we are trying to shrug it off.

Gukesh and  Nodirbek Abdusattorov were involved in a keen tussle in the Queen’s Gambit Declined and for the most part of the middle-game, Gukesh appeared to be crafting another neat victory. But Abdusattorov defended dourly and managed to put Gukesh onto the defensive in a queen and minor piece each ending where he created plenty of threats. In a position that perhaps would have ended in a draw, Gukesh blundered his knight to lose after 72 moves.

Javokhir Sindarov adopted the King’s Indian Defence against R Praggnanandhaa and the Indian played actively to score a victory after 77 moves.

For Team A, the Ruy-Lopez encounter between Pouya Idani and Arjun Erigaisi ended in a quick draw after 30 moves after quickly reaching an ending with rook, knight and pawns each.