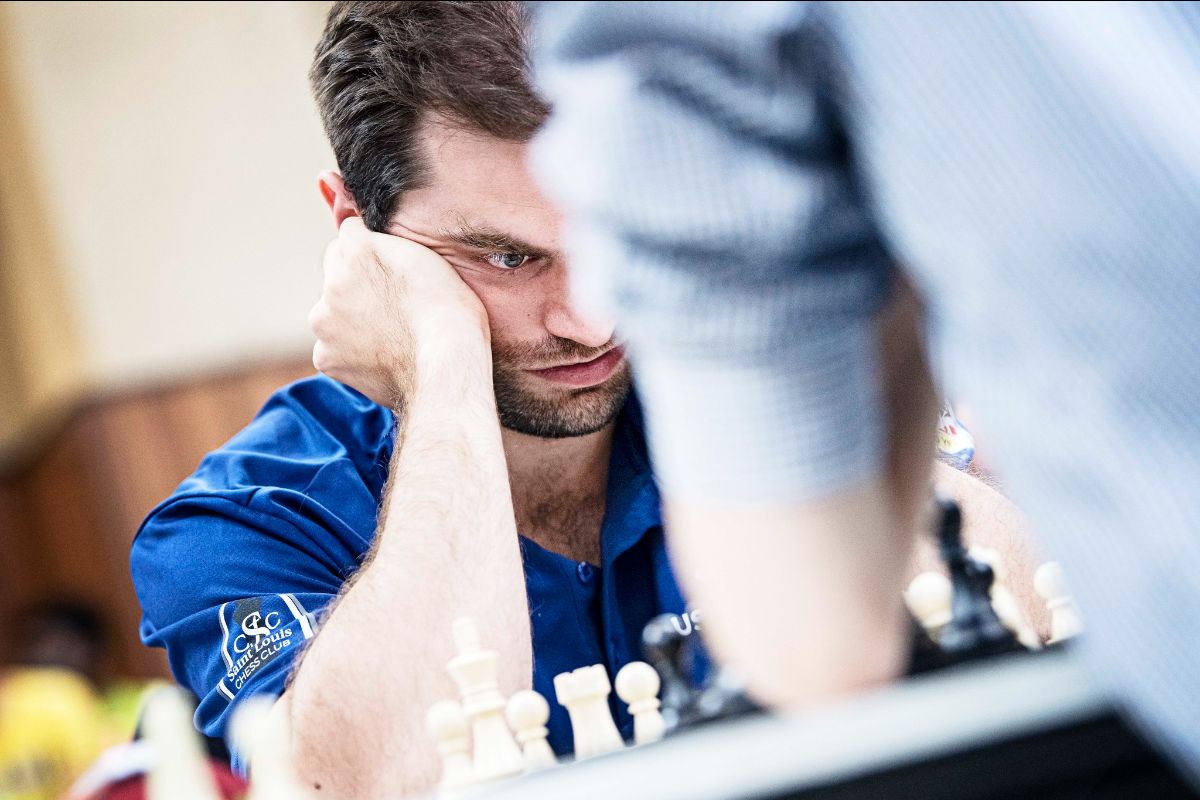 India B Gukesh stuns the world with 7/7

The Olympiad is arguably the world’s largest team championship, played at the same time in a single venue. It’s so huge – more than 350 four-player teams – that it typically takes two or more buildings to lodge all the games.

Here in Chennai, the main venue hall has a capacity for 27 matches in the open category and 20 women’s matches, more than 350 players.

However, since the Norwegian team is not doing very well at the moment – only the world champion Magnus Carlsen is playing at a decent level – this afternoon they faced North Macedonia on open table 28, in venue hall room B, with capacity for the other 1200 players! 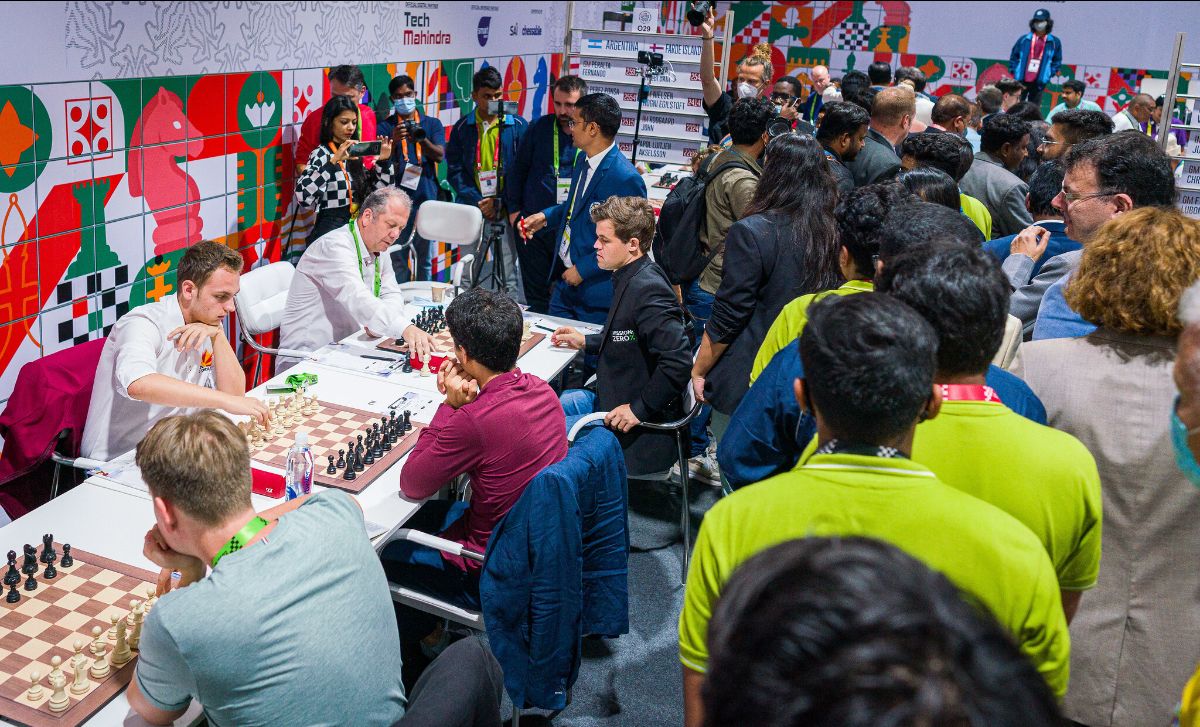 Carlsen’s presence generated great expectation amongst all the mostly amateur teams that play their “own” non-grandmaster Olympiad, and of course, one of the sponsors of the event, Mr. Shrikant Madhav Vaidya Indian Oil Corporation Chairman, who performed the traditional ceremonial first move on his board.

The final score of the match, 2.5-1.5 for Norway, will allow them to return to the main venue tomorrow. However, if they want to continue climbing the ladder, they need to improve on the lower boards.

We were lucky enough to catch board two, Aryan Tari, just before he left the venue, and he agreed to a short interview with FIDE Press Officer IM Michael Rahal. Check it out if you want to know what it feels like sitting next to Magus every day!

Meanwhile, in the main venue, all eyes were on the two main matches.

USA vs Armenia was a classic, one of the most exciting matches to date. After less than 20 moves, Wesley So was already winning in his game against Hrant Melkumyan: the American crashed through with a fantastic rook sacrifice, which in one of the lines would have been followed up by an unbelievable queen sacrifice and mate in six.

On board three, Lenier Dominguez also brought home the point for 2-0 but then disaster struck. Fabiano Caruana lost on board one against Gabriel Sargissian – a very strong grand master who performs strongly in team events. Fabiano is not having the best of events, performing more than 200 points below his rating. 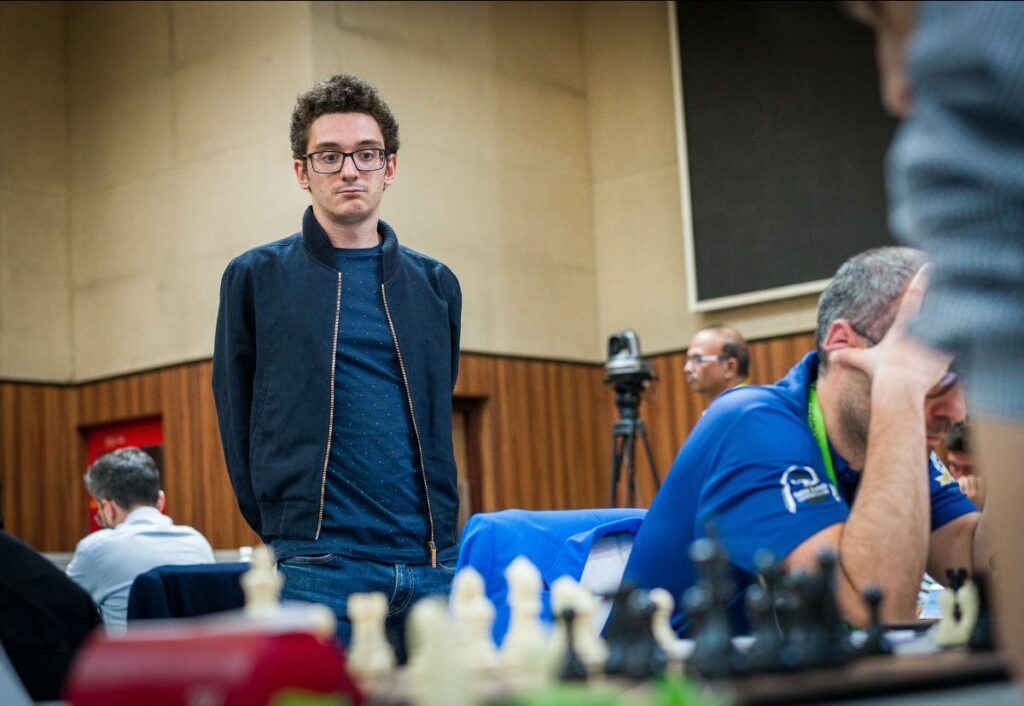 Fabiano Caruna is not having his best tournament so far. PHOTO: Lennart Ootes

It looked like Shankland was going to lose on board four (for a final 2-2) but he got back into the game. When a draw was about to be agreed, a devastated Shankland illegally “premoved” his king, and had to resign immediately. The final result permits Armenia to maintain the lead by one match point.

The other top match was India A vs India C. The A-team outrated their colleagues by more than 100 points and the final 3-1 score more or less coincides with what happened at the board.

Not without difficulties, Erigaisi and Narayanan took down their opponents on boards three and four, while Harikrisna (slightly better most of the game) and Vidit secured the draw on the top boards. They will face Armenia for the tournament lead tomorrow.

Playing for India B, Gukesh D is still on a roll and this afternoon he won his seventh game in a row! His TPR (tournament rating performance) is mind-bending: 3335, nearly 400 points more than Magnus Carlsen, chasing him down.

His opponent, Cuban grandmaster Carlos Albornoz, is rated 2566 and is a very strong player. With Black he achieved a comfortable position after the opening and then he just gradually outplayed him.

Sarin and Praggnanandhaa also won their games, notching up a convincing 3.5-0.5 win against Cuba. Tomorrow they will face the USA in a match that might easily decide the outcome of the young guns – medal or not?

We caught up with five-times World Champion Vishy Anand, Indian’s chess superstar, in the playing venue. Vishy is not playing this year with team India because he is running for election.  Amongst other things, we wanted to find out what he thought about Gukesh’s uncanny performance. 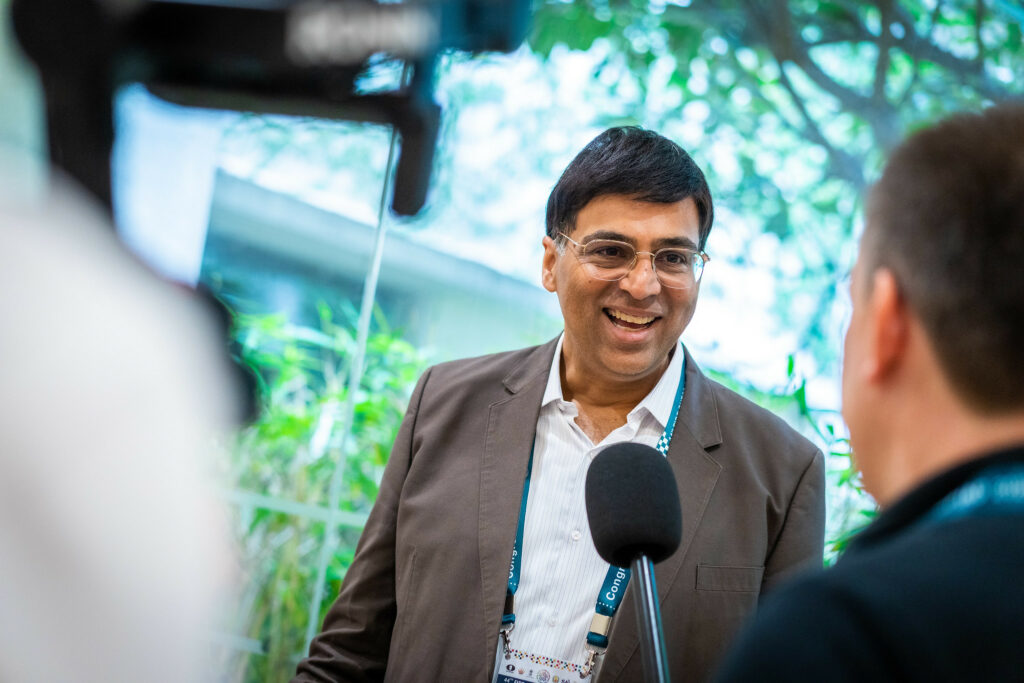 Tomorrow’s other two top matches will feature Germany (2.5-1.5 against Serbia today) against Uzbekistan, who defeated Peru by a massive 4-0 score. Surprise winners Kazakhstan also have 12 points: they defeated Spain by a marginal 2.5-1.5 score in an up and down match that could have gone either was. Their opponent tomorrow will be Azerbaijan, another tough nut to crack.

Of the other favorites, England, Ukraine and especially Poland are underperforming. However, with four rounds to go anything can happen if a team can string together three in a row.

Round 8 will be played August 6th at 3pm sharp and can be followed live on the tournament website.

Games begin at 3pm local time and can be followed live on the tournament website, http://chennai2022.fide.com.

Complete results for round 7 can be found at the official website for the Olympiad, https://chennai2022.fide.com/open-results.

Standings after round 7 can be found at
https://chennai2022.fide.com/open-standings.