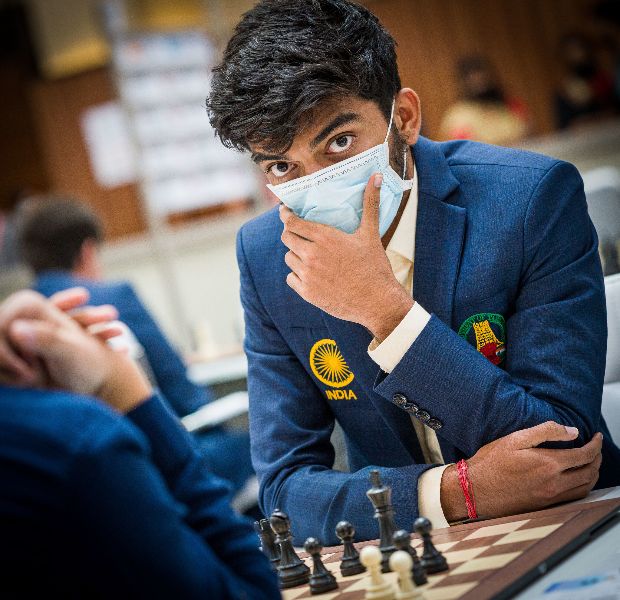 India A Open Team hit the accelerator when it mattered, defeating their fellow countrymen Team C with a 3-1 score. Arjun Erigaisi defeated Abhijit Gupta, and S L Narayanan outplayed Abhimanyu Puranik even as Pentala Harikrishna was held to a draw by Surya Shekhar Ganguly, and S P Sethuraman forced Vidit to split the point.

India Team B, after a loss to Armenia in the 6th round, bounced back with a 3.5-0.5 score against Cuba, with D Gukesh leading from the front once again to notch his seventh successive victory in the tournament. Nihal Sarin and Praggnanandhaa too made merry with two fine victories while Adhiban was held to a draw.

Arjun Erigaisi and Common Wealth Champion Abhijeet Gupta, with well-matched moves, appeared to be heading to a deadlock, but an inaccuracy by Gupta allowed Arjun to romp home the victor after 46 moves in a Queen and pawn ending. “ After the inaccuracy, I had no trouble in steering the game towards a victory.

In another setback for the star-studded USA Team, Armenia held them to a 2-2 draw and continued their sole vigil at the top of the Points tally with 13 points.  India A and India B, USA Uzbekistan are trailing behind with 12 points each. A few matches were in progress at the time of going to press. Fabiano Caruana crashed to his second defeat in this tournament, losing to Gabriel Sargissian.

The game between old war-horses and India’s seasoned campaigners Pentala  Harikrishna and  Shekhar Ganguly did appear to be going Harikrishna’s way for the most part but petered into a draw after 55 well-fought moves. “ Hari came up with a novelty, and I was on the defending side throughout. An inaccuracy by Hari allowed me to escape with the draw” said Ganguly.

Abhimanyu Puranik and S L Narayanan went the Spanish way but the latter dominated the proceedings from the middle game with some fine positional play. An inaccurate pawn grab on the 21st turn invited trouble for Abhimany as Black’s pieces started infiltrating, assisted by the advanced pawns. After Abhimanyu allowed the exchange of his dark bishop, the key defender on the King-side, there was no stopping Narayanan as White’s castle was shattered, and the King exposed. Narayanan’s queen infiltrated devastatingly and, with the help of the rook, completed the winning formalities on the 38th turn.

Standings after round 7 can be found at
https://chennai2022.fide.com/women-standings