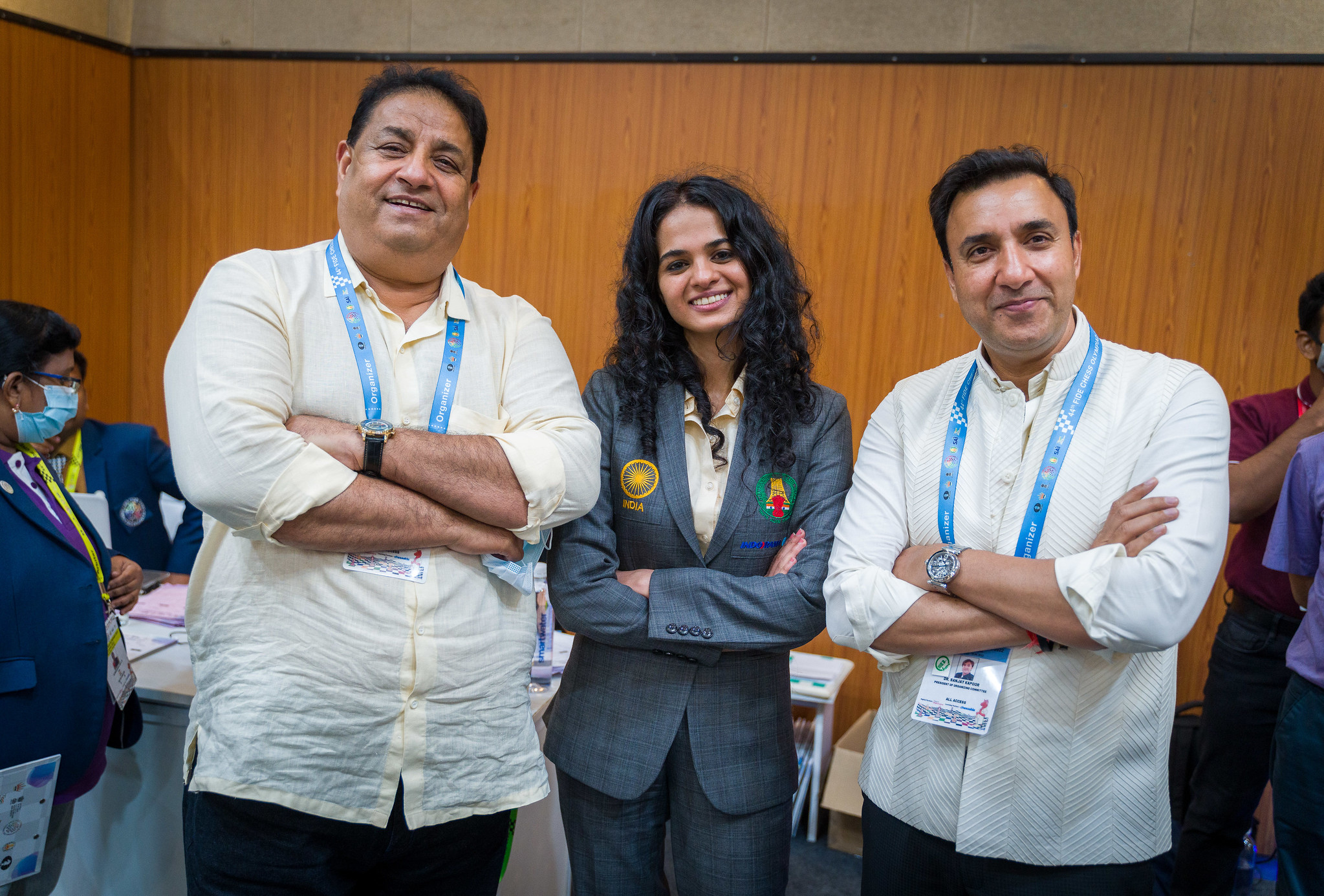 Indian Women A notched their seventh successive victory against sixth seed Azerbaijan with a 2.5-1.5 score to maintain their sole lead in the Women’s section of the 44th Chess Olympiad with 14 points and is a clear two points ahead of the second-placed Ukraine and Armenia. Indian eves suffered a few hiccups after Humpy ended on the losing side in the first finished game. Tania and Vaishali once again rose to the occasion magnificently by scoring hard-fought victories, while Harika also battled hard to split the point. Vaishali played splendidly in a drawn position, pressurizing her opponent with precise positive play and finally scored a delightful victory.

Vaishali later confessed: “Till the 40th turn, my game was dead equal, and I considered settling for a draw. After Humpy’s loss, I had to keep pressing and, interestingly, this was one position which we had worked in the camp with Boris Gelfand, and I followed his suggestions to the ‘T’. A hallmark of the Women’s A Team has been the ability of every player to score a win when the team needed it most.

Abhijit Kunte said: “The way Harika, Vaishali and Tania continued in this pressure position is very heartening. The players understand the situation perfectly and deliver”.

Georgia bounced back after yesterday’s loss to beat Romania 2.5-1.5, and Ukraine trounced Netherland 3.5-0.5 while Bulgaria held Poland to a 2-2 draw.

Govhar Beydullayeva and Vaishali fought in a Bogo Indian game without conceding an inch to keep the position balanced. The transformation into the rook pawn ending appeared heading towards a draw though Vaishali had an extra pawn. What followed was some amazing display of willpower and grind on the board with Vaishali emerging victorious after 72 moves.

Tania and Ulviyya battling in a Queen’s Gambit Declined game matched pace for the most part till the middle game. A strayed knight on the king-side allowed Tanya to break through in the centre, and even though her opponent’s rook had invaded the seventh rank, Tanya managed to exchange most pieces and steered the game to an advantageous ending. Tanya then pocketed the point after 63 points.

Humpy did all the good work in the initial stages of a Anti-Nimzo-Indian game against Gunay Mammadzada but lost way after getting an advantageous position. The crafty exchange of pieces by her opponent resulted in her getting a couple of pawns to settle the issue in her favour after 45 moves.

India Women B Team seeded 11th was shocked by 27th seeded Greece 1.5-2.5. Divya Deshmukh scored the lone victory for India while Vantika Agrawal and Soumya Swaminathan lost their encounters and Mary Ann Gomes had to stay content with a draw.

India Women C defeated Switzerland by 3-1, with victories by Eesha Karavade and P V Nandhidhaa, and draws by Bodda Pratyusha and Vasnawala Vishwa.

Standings after round 7 can be found at
https://chennai2022.fide.com/women-standings