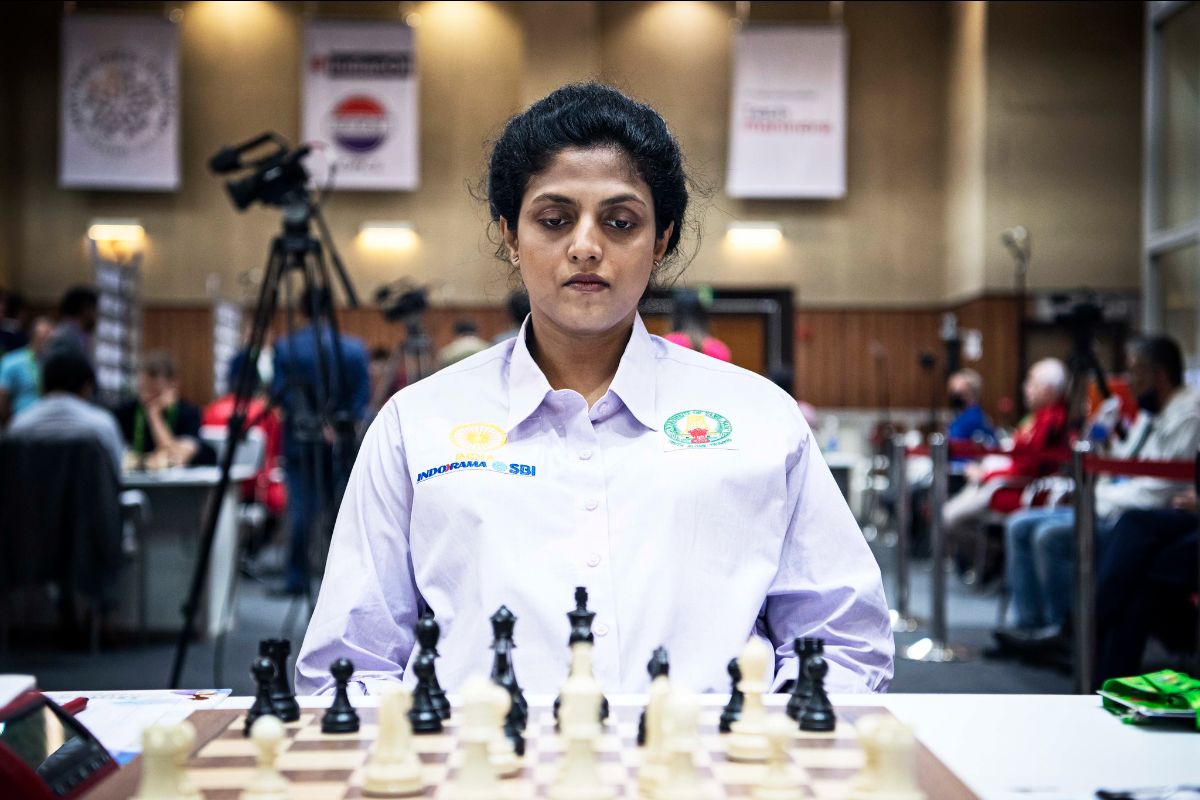 The Indian Juggernaut rolled on in the third round of the 44th Chess Olympiad being played at Mamallapuram, Chennai with all three teams winning their third-round matches to keep up perfect scores. India A defeated England 3-1, India B scored over Indonesia 3-1, and India C beat Austria 2.5-1.5. The Chess Olympiad is an 11-round Swiss League event, and the Matches promise to be more intense and tougher from the fourth round onwards.

Vaishali and Bhakti scored for Team A, with Harika and Tania drawing their encounters, while Team B was propelled with victories from Vantika Agrawal and Soumya Swaminathan. For Team C, Nandhidhaa and Pratyusha brought in the points while Eesha Karavde drew her encounter with Sahithi V M ending on the losing side.

Koneru Humpy was rested today, and Harika took over on the top board for the first game in this Olympiad which incidentally is her 9th one along with the two virtual ones during the Pandemic.

31-year-old Harika is in the advanced stages of her first pregnancy and was playing Jovanka Houska of England on the top board for India A team. Harika opted for the Queen’s Gambit Declined variation against Jovanka and fortunes fluctuated throughout this game. The players indulged in a spate of exchanges at regular intervals to enter a rook and three pawn each ending and, with no progress possible, decided to split the point on the 40th turn.

A disappointed Harika quipped, “ The game was balanced with the position fluctuating only slightly, never had enough advantage to press.”

WGM Nandhidhaa P V representing Team C, was the first player to gain a point, courtesy of a walkover by Chiara Polterauer, who is unwell. Nadhidhaa, who has notched 3 points in 3 outings, quipped “This is my first Olympiad and am playing in my home- town Chennai, reason enough to give me extra energy. In my opinion, ratings and seedings don’t matter. Even our team has a chance to be amongst the medals, and we are ready to give our best.

Eesha Karavade enhanced her space advantage in a Sicilian Defence game against Katharina Newrkla, with the latter playing passively. A centralized knight and well-posted pieces indicated winning possibilities for Eesha, but the game abruptly ended in a draw after 27 moves, with most pieces still gracing the board.

Complete results for round 3 can be found at the official website for the Olympiad, https://chennai2022.fide.com/women-results.

Standings after round 3 can be found at
https://chennai2022.fide.com/women-standings