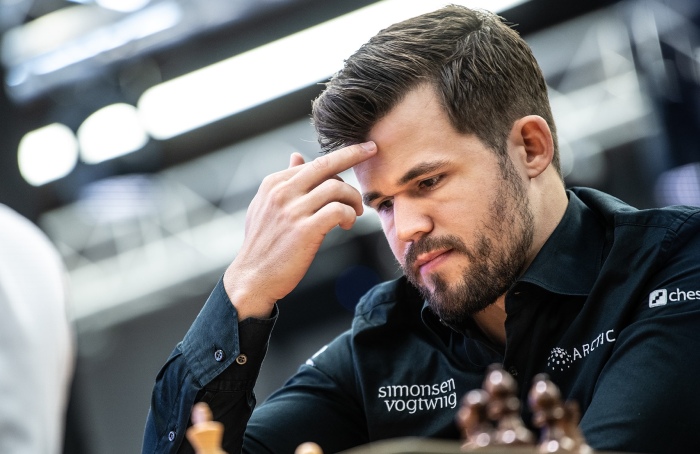 The second round of the Olympiad featured the debut of World Champion Magnus Carlsen, playing on board one for Norway. One minute before the start of the round, all players were seated and ready, including Carlsen, with the exception of the other three Norway teammates, delayed outside due to the overgrowing level of chess enthusiasts filling the playing hall every day.

Nonetheless, the convincing 4-0 win against the strong Uruguayan team, led by former German player GM George Meier, left no doubt that they have come to give their best.

The day began with a very special side act: five-times World Champion and Indian chess legend Viswanathan Anand addressed hundreds of children who had come from different parts of India to witness their first Olympiad. “Vishy the King” answered numerous questions and signed hundreds of chess boards for the aspiring grandmasters.

One of the questions came from two 8-year-old twin sisters from Delhi. They asked how pieces could be “distracted”, meaning moved, which was lost in translation. Anand’s witty answer was received with a huge round of applause: “My pieces never get distracted. It’s the opponent you should aim to distract, not your pieces!”

Although the United States of America are theoretically top seeds, they are located on match two due to the fact that India (second seed) is playing at home. This afternoon they dropped 1,5 game points against seed 47, Paraguay.

As fate would have it, former Cuban player GM Lenier Dominguez scored the match win in a clean Kalashnikov Sicilian against GM José Fernando Cubas: a key win to keep their aspirations intact. 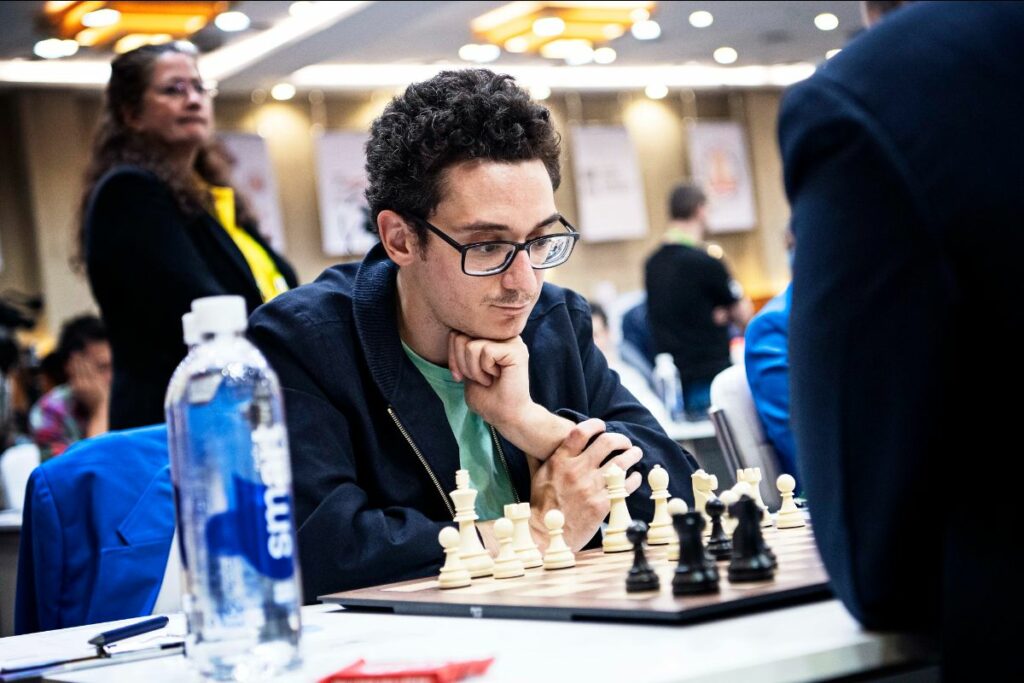 Birthday boy GM Fabiano Caruana, who turned 30 today, was unable to celebrate with a win. His seasoned opponent GM Axel Bachman tried out a very solid side-line on the Spanish Opening and was able to comfortably hold the draw with Black.

Second seed and fan favourite India A, playing on home turf, scored a very convincing 3.5-1.5 win against the tough Moldova team, substantially weakened due to the absences of Iordachescu and Bologan (spotted by yours truly outside the playing venue but essentially retired from competitive chess).

Second board Erigaisi Arjun, although an outstanding player, couldn’t find his form and was only able to draw with White against IM Andrei Macovei, who was arguably slightly better during most of the game.

In other top matches, Spain scored a very convincing 3.5-0.5 win against Belgium, headed by junior GM Daniel Dardha. A key victory in this match was GM Vallejo Pons beheading the Sicilian Dragon – his opponent IM Stefan Docx had defeated Spain’s number one in their previous encounter in Gibraltar some years ago.

Poland, Azerbaijan, the Netherlands and Ukraine also progressed to 4/4 but only the Ukrainians, fielding board one GM Anton Korobov for the first time, were able to go all the way with a stunning 4-0 against Albania.

Slightly lower down, but still in favourite area, Germany, England, Armenia, Iran and France have all won their first two matches, but I would dare to say that all eyes are on team India B.

2600+ GM’s Gukesh, Sarin, Praggnanandhaa, Adhiban and Sadhwani (all under 18 except Adhiban) have already won their eight games and are making their claim for the surprise team of the event. Under the watchful eye of “sensei” coach Ramesh, the “kids” are in great form – Estonia fell under their sword this afternoon.

And of course, a chess Olympiad (184 teams!) wouldn’t be complete without hundreds of enthusiasts from countries all over the world, most of them non-titled players. 25-year-old Kenyan champion Martin Njoroge (rated 1973) is clearly a standard bearer for these teams.

In an interview with FIDE Press Officer Michael Rahal, Njoroge summed up his team’s philosophy: “We here to win! We are “simbas”, which means lions. We are here to roar and win… The Olympiad is the dream of every chess player, so I am super excited to be playing in this tournament! “.

Tomorrow’s third-round pairings include some interesting match-ups such as Spain-Brazil, Italy-Norway and Ukraine-Cuba. Games resume at 3 pm sharp and can be followed live on the tournament website.

Complete results for round 2 are available on the official website:
https://chennai2022.fide.com/open-results